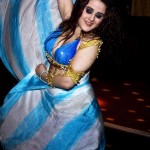 Having a Hellenic themed wedding is not just about having statues of the Gods and Goddesses, blue tablecloths, marble pillars… It is about the music, the food, the entertainment, the feeling of being in the Greek isles.

Being of Greek descent, I know the music, the food, the people… did I mention the food?

Food is a big part of Greek culture and if you’re going to go Hellenic, then the food has to be on pointe! In terms of catering and facility, I can recommend Ikaros. Ikaros is now in a newly remodeled space in Greek town, right across from St. Nicholas church. They can accommodate 200 in their second floor ballroom and has a great dance floor. PLUS their food is fantastic! Almost as good as my mom’s and THAT’s saying a LOT

There are several options for Greek music at your event. You could have a live band or a DJ. There are a few DJs in the area who are capable of playing Greek music as well as American music. Some of the live bands even work with DJs, so that you can have both flavors at your event! In terms of live bands, I am partial to Apollonia.  I adore their female singer, Maria.  She has one powerhouse of a voice!

And you can’t have a band without dancing! Belly dancing, Greek folk line dancing, it all plays a part in the music of Greece. I have spent most of my life dancing Greek line dances at family parties as well as performing them in a group. It takes practice, but it is worth it. There is something about the comradely, about not being the only one out there alone that really makes people excited about it. Young and old EVERYONE joins in! I would LOVE to teach anyone who wants to learn, it is even included in some of my Greek packages

If you want a Hellenic themed wedding, with a belly dancer in a Greek costume, with a crazy Greek flag veil, then Bellydance by Amartia is the one for you! I’m happy to provide the extra OPA to your event!