How to Choose a Greek Song to Dance to

Bellydance by Amartia has a lot of experience in choosing a Greek Song to dance to, regardless of the performance. There are a few things to think about when choosing a Greek Song.  (All of the advice herein is in the context of dancing for a Greek audience. If the audience will not have a single Greek person in it, then the chances of offense are lower).


First, is the song Greek? You may laugh but sometimes you may not know if it is a Greek song. If there isn’t any information listed on the song or if you can’t read Greek then you don’t know.  Sometimes ITunes lists Greek music under world or Pop, so it may not blaringly say GREEK! The same goes with finding a great song on YouTube. It’s a good idea to find out.  You may be able to use Google translate but if the title is written in Greek/English phonetics, then you’ll have to find your friendly neighborhood Greek and ask them.


Secondly, is the song a bellydance song? There are some Greek songs that are fantastic but they are actually folkloric songs. These are meant to be danced to only via a line dance. Sometimes these are marked Rembetika or Dimotika but it isn’t always. It can also be named via the folk dance that goes along with the song: Kalmatiano, Syrto, Sousta, for example. If you can figure out if the song is a folkloric song then it would behoove you to not bellydance to them OR to add them to the end of your set as a line dance to get the audience up to dance. 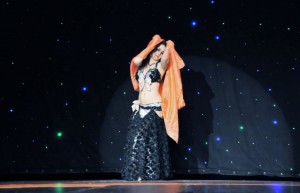 So, the song is Greek and it’s definitely a bellydance song, now what? For the most part, Greek lyrics are safe to dance to. As with Arabic music, translation is important. It’s good to make sure that the upbeat song is actually about an upbeat topic. If your song is about a sassy girl, then you can dance it sassy. If your song is about a couple in love, then you dance it as if love-struck. This goes the extra mile and adds that extra to your performance.


Lastly, where do I start? There is lots of Greek music out there. The more recent pop music is more modern and has a lot of rap and hip-hop in it. It can be hard to find a song to dance to. There are a few artists who always have at least one bellydance-able hit: Angela Dimitriou, Anna Vissi, and Despina Vandi just to name a few. Albums that are compilations and/or say Kolasi are also a good bet for music.


These are just a few tips. If there are any questions, Bellydance by Amartia is more than happy to offer her services to help you choose a Greek song to dance to.