LED Belly Dance Props- Fab trend or too much?

You’ve all seen them, LED props. Wings, canes, veils, capes, and even costumes. Why not just use a prop, use one that can glow or light up!

So, before we get into the opinion part of this post, let’s go into all the types:

DIY?
I haven’t attempted this but I have heard of a few dancers putting LED lights into their costumes or onto their props on their own. I’m not sure how easy this is, it seems difficult to account for wiring that still looks good when the wings are turned off as well as on. Also, where to put the switch? the batteries? Especially when discussing costuming.

Ok,  now what about some pros and cons:

CON: A very large battery pack that you’d have in the back and would sometimes be visible.
PRO:I believe that now the battery packs and smaller, some even being a USB style, so you don’t have to worry about batteries at all.

CON: There are also some that you have to have on the entire time. Is glow good, the whole performance?
PRO: I know, that a few styles are able to be turned off and on at whim, as well as change color.

CON: But what if your venue isn’t dark? Can you still see the lights? Is it worth it?
PRO: The wow-factor. Unfortunately, not all audiences recognize good dancing, sometimes it takes a wow prop, or even a light-up one to capture there attention. THEN your skill can dazzle them.

CON: What about the changes in the weight of the prop, does it make your movements different and you need to adjust them
CON: Aren’t we taking away from the dance enough? isn’t the dance itself good enough. does that make us more of a circus side show than artists?

PRO: Perhaps we are. It is all in the eye of the beholder and the dancer.

I personally am PRO LED! I have 2 pairs of LED wings. One that I had purchased from a reputable dealer on etsy and another more recently from Bellydance-LED . I have to say, I love them. Specifically in those dark venues or in clubs, it’s great to be able to light up and have that wow factor. I don’t think it takes away from the dance- no more or less than any other prop does. I do believe that using several LED props in one show may be taking it a bit too far, but I see no harm in adding one or two to the mix. I do not think I would use them in a show that included dancers such as a hafla. But my more nightclub flashy gigs? Most definitely! 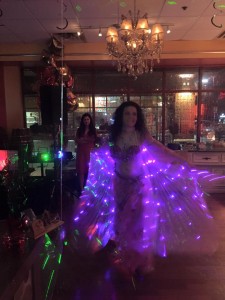 Of course assuming they actually had enough room for a performance with wings! I have taken out a chandelier or two  in my day!