What is a Greek Belly Dance Bouzouki?

Bellydance by Amartia wrote a blog post last week about Greek Belly dance.  Along with discussing the music, the speed, and the movement, she also discussed the instruments involved. In the post she mentioned the bouzouki. One of the questions that were asked from readers was what is a Bouzouki?


To me, this is shocking. I thought that everyone knew what a bouzouki was.  How can you not know! Apparently I was incorrect in my assumption and not everyone does.  Besides being the most recognized Greek instrument (usually) by sound and shape; it is also one of the most present instruments in Greek belly dance music.


Rather than babble on and on about the little that I know about the instrument, I did online research!  I would have asked my mom but I think it would have just involved a lot of pantomiming and not a lot of concrete answer. With help from the internet, I am able to clearly answer your questions!


In general, (folkmusic.com): The bouzouki is widely present in Greek folk music and in Greek belly dance music or tsifteteli.  It is in the same family as a mandolin and a lute. It is shaped like a teardrop. It has evolved from a 6 string instrument (3 pairs) to eight strings (4 pairs). Apparently there is also an Irish bouzouki- which I was totally not aware of! The Irish bouzouki has four pairs of strings and a flatter back. The Irish version is the one most frequently played din contemporary American folk music.


To be more specific (bouzouki.com):  the bouzouki has been associated with Rebetika music it has now elevated its status to the more popular Greek music known as Laika and Elafrolaika. It is a member of the “tambouras” family of instruments.  The Word bouzouki itself is a derivative of the Turkish word “Buzuk” which means broken, but can also mean “small change”. 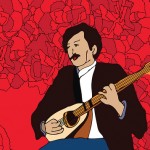 Aside from the changes in the strings, the bouzouki has a colorful history. It was apparently persecuted by the authorities as they associated it to the criminal society of Greece, (unfairly and wrongly). It is purely a solo instrument. The bouzouki cannot just be played by anyone. It is not meant to be mechanical it is supposed to relay your feelings, thoughts and emotions. Definitely not a 1 and 2 and 3 and instrument.


In terms of technique and training, a good Bouzouki player must be able to produce clean notes at a higher speed than other stringed instruments. It takes years of studying and countless hours of constant practicing on a daily basis to achieve this.


So there you have it, Bellydance by Amartia has answered the Greek belly dance follow up question, what is a bouzouki?